Attempt now to get your rank among 2651 students!

A normally consolidated deposit of clay extends to a depth of 20m from ground surface. The groundwater table is 8m below ground surface. If the plasticity index of clay is 70% determine the unconfined compressive strength of clay sample taken from a depth 15m from the ground surface. γsat=19.5kN/m2 and γd=14kN/m2 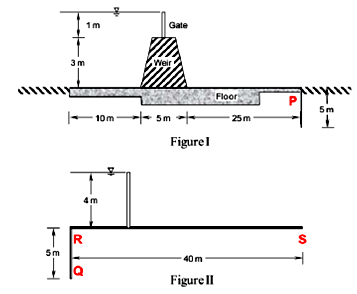 What is the uplift pressure head at point P downstream of the weir (junction of floor and pile as shown in the figure I)?

A 4 m thick layer of normally consolidated clay has an average void ratio of 1.30. Its compression index is 0.6 and coefficient of consolidation is 1 m2/yr. If the increase in vertical pressure due to foundation load on the clay layer is equal to the existing effective overburden pressure, the change in the thickness of the clay layer is ______ mm.

Yield of a well is 10lit/sec under a depression head of 4m. The value of specific capacity per unit area is 0.6/hr. The bottom diameter of the dug well (in m) is ____

10 m below sea water is the bed of sea. Take unit weight of water = 9.81 kN/m2. Take the specific gravity of soil solids and that of sea water as 2.67 and 1.03 respectively. Relative density of soil is 20%. Maximum void ratio is 1 and minimum void  ratio is 0.5. By how much amount the effective stress will change if water level rises by 8 m from initial.

The relationship between water content (w%) and number of blows (N) in soils as obtained from Casagrande’s liquid limit device, is given by
W = 21 – log10 N
The liquid limit (in %) of soil is

From the following type of foundation given below which one of the following foundation can be adopted for following situation. Consider the soil as a low allowable bearing capacity and the soil deposit contains compressible loess. The foundation is provided for a structure carrying heavy loads.