Attempt now to get your rank among 458 students!

Two weights are supported as shown in the figure. Tension in string PQ is ______. 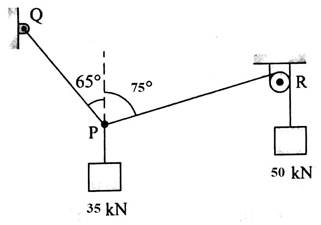 A particle of mass 2 kg is travelling at a velocity of 1.5 m/s. A force f(t)=3t2 (in N) is applied to it in the direction of motion for a duration of 2 seconds, where t denotes time in seconds. The velocity (in m/s, up to one decimal place) of the particle immediately after the removal of
the force is________

A simple mass-spring oscillatory system consists of a mass m, suspended from a spring of stiffness k. Considering z as the displacement of the system at any time t, the equation of motion for the free vibration of the system is

The natural frequency of the system is

Mathematical idealization of a crame has three bars with their vertices arranged as shown in the figure with a laod of 80 kN hanging vertically. The coordinates of the vertices are given in parentheses. The force in the member QR, FQR will be 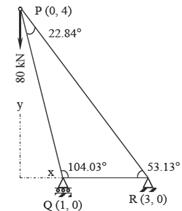 connected by a flexible cord resting upon a horizontal plane and an incline are shown in figure. The angle of inclination of the incline plane is 23

at which motion of the system will impend. Find the coefficient of static friction. (Take

A vehicle applies brake and skids through a distance of 60 m, before colliding with another parked vehicle, the weight of which is 75% of former. If distance travelled by both vehicle after collision is 15 m before stopping, then the initial speed (in m/sec) of moving vehicle was
[Assume collision is perfectly plastic, brake efficiency

Block A weighing 200 kg resting on the rough floor supports block B weighing 100 kg as shown in the figure. Both the blocks are connected with a rope passing over a smooth pulley. Find the force P required to impending motion. (Take

and coefficient of friction = 0.3)

A bullet of weight 1.4g enters a wooden partition block at a velocity of 955 m/s and 0.003s after entering the block. Determine the length penetration of bullet.

A rigid member ACB is shown in the figure. The member is supported at A and B by pinned and guided roller supports, respectively. A force P acts at C as shown. Let RAh and RBh be the horizontal reactions at supports A and B, respectively, and RAv be the vertical reaction at support A. Self- weight of the member may be ignored.
Which one of the following sets gives the correct magnitudes of 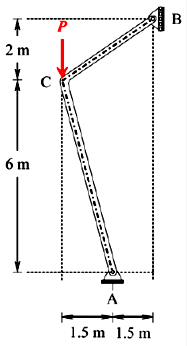 A particle P is moving on a circular path of radius 1m. The angular location of the particle is described by

=2 sin t. The magnitude of the total acceleration (in m/s2) of the particle at time t=π/3 seconds is_