Attempt now to get your rank among 547 students!

Consider the given circuit,

In this circuit, the race around

The output of a 3-stage Johnson (twisted-ring) counter is fed to a digital-to-analog (D/A) converter as shown in the figure below. Assume all states of the counter to be unset initially. The waveform which represents the D/A converter output V0 is

The function of a strobe function in digital system is

Following shift register is initially loaded with the bit pattern “1010”. After how many clock cycles will the content of shift register be “1010” again?

A master slave flip-flop has the characteristic that

For each of the positive edge-triggered J-K flip flop used in the following figure, the propagation delay is ΔT 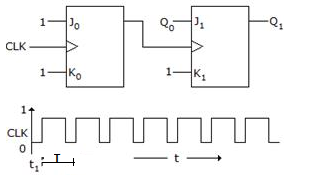 Which of the following waveforms correctly represents the output at Q1?

The present output Qn of an edge triggered JK flip-flop is logic 0. If J=1, then Qn +1

For the circuit shown, the counter state (Q1 Q0) follows the sequence