Attempt now to get your rank among 739 students!

Consider the feedback system shown in the figure. The Nyquist plot G(s) of is also shown. Which one of the following conclusions is correct?

In the AC equivalent circuit shown in the figure, if the input current is very large, the type of feedback is 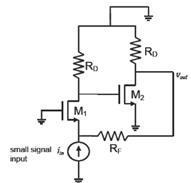 An analog signal is band-limited to 4 kHz, sampled at the Nyquist rate and the samples are quantized into 4 levels. The quantized levels are assumed to be independent and equally probable. If we transmit two quantized samples per second, the information rate is

The number of open right half plane poles of

The feedback configuration and the pole-zero locations of

are shown below. The root locus for negative values of k, i.e. for –∞< k < 0, has breakaway/break in points and angle of departure at pole P (with respect to the positive real axis) equal to

Four voice signals each limited to 4 KHz and sampled at Nyquist rate, are converted into binary PCM signal using 256 quantization levels. The bit transmission rate for the time division multiplexing signal will be

Consider the feedback control system shown below which is subjected to a unit step input. The system is stable and has the following parameters kP = 4, ki = 10, ω = 500 and ξ = 0.7.

The steady state value of z is

Consider a continuous-time signal defined as

Where ‘*’ denotes the convolution operation and t is in seconds. The Nyquist sampling rate In samples/sec) for x (t) is_________.