Attempt now to get your rank among 1355 students!

A synthetic sample of water is prepared by adding 100 mg Kaolinite (a clay mineral), 200 mg glucose, 168 mg NaCl, 120 mg MgS04, and 111 mg CaCl2 to 1 liter of pure water. The concentrations of total solids (TS) and fixed dissolved solids (FDS) respectively in the solution in rug/L are equal to

The following statements are related to temperature success developed in concrete pavement slabs with free edges (without any restraint):

Four columns of a building are to be located within a plot size of 10 m × 10 m. The expected load on each column is 4000 kN. Allowable bearing capacity of the soil deposit is 100 kN/m2. The type of foundation best suited is

To provide safety against piping failure, with a factor of safety of 5, what should be the maximum permissible exit gradient for soil with specific gravity of 2.5 and porosity of 035?

As per the Indian Standard soil classification system, a sample of silty clay with liquid limit of 40% and plasticity index of 28% is classified as

The water content of a saturated soil and the specific gravity of soil solids were found to be 30% and 2.70, respectively. Assuming the unit weight of water to be l0kN / m\ the saturated unit weight (kN/m3), and the void ratio of the soil are

An open-ended steel barrel of 1 m height and 1 m diameter is filled with saturated fine sand having a coefficient of permeability of 10–2 m/s. The barrel stands on a saturated bed of gravel. The time required for the water level in the barrel to drop by 0.75 m is

For the soil strata shown in figure, the water table is lowered by drainage by 2m and if the top 2m thick silty sand stratum remains saturated by capillary action even after lowering of water table, the increase in effective vertical pressure in kPa at mid–hight of clay layer will be 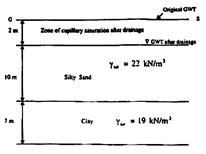 Identical surcharges are placed at ground surface at sites X and Y, with soil conditions shown alongside and water table at ground surface. The silty clay layers at X and Y are identical. The thin sand layer at Y is continuous and free–draining with a very large discharge capacity. If primary consolidation at X is estimated to complete in 36 months, what would be the corresponding time for completion of primary consolidation at Y? 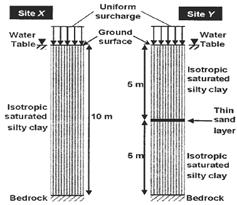 A spillway discharges flood flow at a rate of 9 m3/s per metre width. If the depth of flow on the horizontal apron at the toe of the spillway is 46 cm, the tail water depth needed to form a hydraulic jump is approximately given by which of the following options?

Sieve analysis on a dry soil sample of mass 1000g showed that 980g and 270g of soil pass through 4.75mm and 0.075mm sieve, respectively. The liquid limit and plastic limits of the soil fraction passing through 425 µ sieves are 40% and 18% respectively. The soil may be classified as

The soil profile below a lake with water level at elevation = 0 m and lake bottom at elevation = –10 m is shown in the figure, where k is the permeability coefficient. A piezometer (stand pipe) installed in the sand layer shows a reading of +10 m elevation. Assume that the piezometric head is uniform in the sand layer. The quantity of water (in m3/s) flowing into the lake from the sand layer through the silt layer per unit area of the lake bed is: 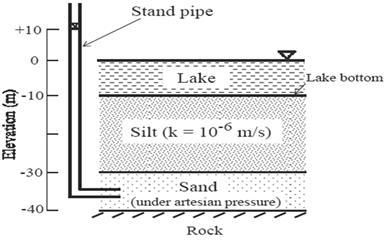 Laplace equation for water flow in soils is given below:

In a 6 m thick stratum of fine sand having submerged density of 11 kN/m3, quick sand condition occurred at a depth of 4.2 m of excavation. What is the depth of lowering of ground water table (in m) required for making an excavation 5 m deep?
[Take density of water as 10 kN/m3]