Attempt now to get your rank among 305 students!

A simply supported rectangular beam of span 20.0 m is subjected to UDL. The minimum effective depth (in m) required to check deflection of this beam, when modification factor for tension and compression reinforcements are 0.9 and 1.1 respectively, will be

A column having helical reinforcement, the core diameter (dc)is 360mm and diameter of steel(Ø)provided is 12mm.The minimum pitch (p)can be provided is ____ mm.

A Warren truss is supported as shown in the given figure. Which one of the following diagrams represent the influence line for the force in member U3U4?

In a simply supported girder AB as shown below:

The maximum positive shear force at section x-x due to a u.d.l of intensity 40 kN/m which is moving right to left, of any length will be______.

A rectangular concrete beam 200 mm wide and 400 mm deep is prestressed by a straight cable carrying an effective prestressing force of 250 kN at an eccentricity of 50 mm. The beam supports a udl of 8 kN/m including its self weight. Span of the beam is 6 m. If the modulus of rupture of concrete is 5 N/mm2, the load factor against cracking is ____.

The stress strain curve of concrete as in the figure below and partial factor of safety as 1.33 for concrete.

A continuous beam having 4 spans is fixed at its ends. It is supported by three rigid supports in between then the order of the reduced stiffness matrix is given by

A portal space frame have a vertical slider shown below. The kinematic indeterminacy is? 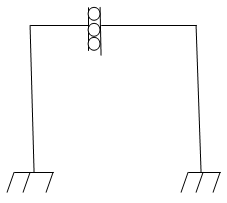 Match List-i (Structure) with List-ii (Degree of static indeterminacy) and select the correct answer using the code given below the Lists:
List-I
A.

For the given truss. 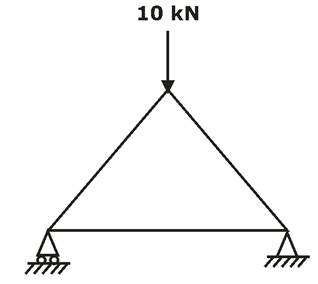 Joint A is roller joint, B is hinge joint and C is the top most point at which load is acting