Attempt now to get your rank among 166 students!

Over a basin of area 333 km2, there was a storm for 6 h with a uniform intensity of 2 cm/h. The observed runoff was 20×106 m3. The average rate of infiltration for the basin was

The hyetograph of a storm event of duration 140 minutes is shown in the figure. 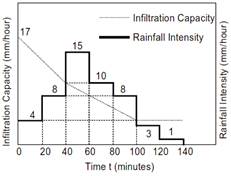 The infiltration capacity at the start of this event (t = 0) is 17mm/hour, which linearly decreases to 10 mm/hour after 40 minutes duration. As the event progresses, the infiltration rate further drops down linearly to attain a value of 4mm/ hour at t = 100 minutes and remains constant thereafter till the end of the storm event. The value of the infiltration index, ϕ (in mm/hour, round off to 2 decimal places), is _______

Measured infiltration rates, f in cm/hr, for every hour from t=0, when the rainfall just commenced to t=8 hours are given in table below. The rainfall lasts over 8 hours. Calculate the total infiltration quantity during 8 hours using Horton constant k = 4 day-1. 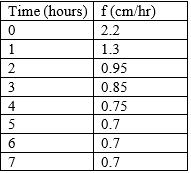