Attempt now to get your rank among 396 students!

A watershed has five non-recording raingauges, installed in its area. The amount of rainfall recorded for one of the year is given below:

Find the sum of the required optimum number of non-recording and recording rain gauges for this catchment. Assume an error of 10% in the estimation of mean rainfall.

Rainfall depth over a watershed is monitored through six number of well distributed rain gauges. Gauged data are given below:

A lake with surface area of 400 ha has saturation vapour at water surface = 18.96 mm of Hg and actual vapour pressure of air = 9.24 mm of Hg. The wind velocity at 2.5m above the ground surface is 12.5 km/hr. Estimate the average daily evaporation from the reservoir in mm/day using Meyer’s formula considering it to be a shallow water body.

Five rain gauges are located on a basin as shown in figure. What will be the mean rainfall (in cm) over the basin using Thiessen Polygon method, if the rainfall at stations A, B, C, D and E are 10 cm, 8 cm, 11 cm, 12 cm and 9 cm respectively? 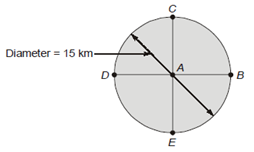