Attempt now to get your rank among 1371 students!

Lime mortar mixing is done in

Which of the following is a correct representation?

Statement-I : When plastering on building exteriors, more of coarser particles of sand are used in regions where seasonal rainfall is often intense and the total annual rainfall also is relatively more.

Statement-II : Such type of ‘dhabbah’ plastering effects the minimization of rainfall impacts resulting in less formation of mosses and less surface discoloration but may not reduce seepage to the interior.

Which of the following is an ODD one as regards ‘requirements of good brick-earth?

When a first class brick is immersed in cold water for 24 hours, it should not absorb water by weight more than

A project has 3 activities A, B, and C in series. The time estimates(in days) for three activities are as follows

The standard deviation for the project is

The expected completion time of a project follows a normal distribution, with a mean of 21 days and a standard deviation of 4 days. The probability that the project will be completed in between 22 to 25 days is _________ % [Correct to three decimal places]

Consider the following break even chart, the term A is. 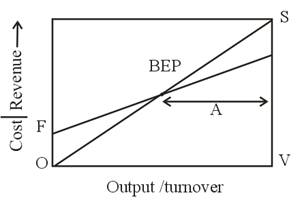 Consider following statements regarding various costs associated with a project:

(i) For any project, direct cost is increased when project duration is reduced.

(iii) Crashing of a network decreases the direct cost.

(iv) Crashing of a network increases the indirect cost.

Which one of the following is the objective in crashing?