Attempt now to get your rank among 56 students!

Calculate the value of bending moment of a simply supportive beam having the span length 8 m and 40 mm radius of cross-section carries a consistently applied load of 2.2 kN/m.

A beam of length ‘4L’ is simply supported on two supports with equal overhang of ‘L’ on either side and carries three equal loads at equal distance ‘2L’ between EACH load. Which one of the following diagram qualitatively represents correct variation of shearing force along the beam?

The bending moment diagram for a simply supported beam is a rectangle over a larger portion of the upon except near the supports. What type of loads is the beam carrying?

A beam ABC shown in given figure is horizontal. The distance to the point of contraflexure from the fixed end A is ________ m. (Take final moment reaction at A is 1 kN-m as shown in figure) 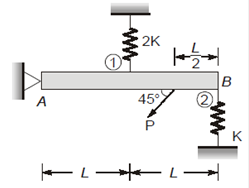 Bending moment diagram of a beam is shown below

Which one of the following diagram represents correct variation of shearing force along the length of same beam?