Attempt now to get your rank among 349 students!

Which one of the following is a procedural language?

Suppose R & S are two relations, R (A, B, C) and S (A, C, D). Here, A in relation S is the foreign key (on Delete cascade) referencing to the primary key of relation R. Number of tuples in relation R & S are 100 and 200 respectively. Also, the no of times ‘A’ value can be repeated in S is maximum 5 times. Suppose an update was made, and three values (any random value) of A in R get deleted. What is the range of maximum no. of tuples in natural join of R & S?

Consider the following schema:
Suppliers (sid: integer, sname: string, address: string)
Parts (pid: integer, pname: string, color: string)
Catalog (sid: integer, pid: integer, cost: real)
The key ﬁelds are underlined, and the domain of each ﬁeld is listed after the ﬁeld name. Therefore sid is the key for Suppliers, pid is the key for Parts, and sid and pid together form the key for Catalog. The Catalog relation lists the prices charged for parts by Suppliers.
Which of the following query generate the list of pair of Sids such that the supplier with first sid charges more for some part than supplier with the second sid?

p and q are conditions and R is relation schema then which of the following option is/are valid?

How many of the following statements are wrong?

Consider the tables below 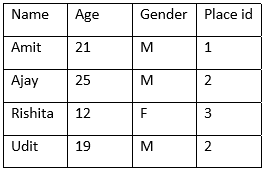 Number of elements in the output of the following query?