Attempt now to get your rank among 1107 students!

. According to Boussinesq’s equation, the vertical stress at point P2 shown in figure will be

In case of governing equations for calculating wheel load stresses using Westergaard’s approach, the following statements are made.
I. Load stresses are inversely proportional to wheel load
II. Modulus of subgrade reaction is useful for load stress calculation

Standard Newmark's influence chart is shown in the given figure. If loaded equally, the area marked 1, 2 and 3 will yield pressure at the centre such that 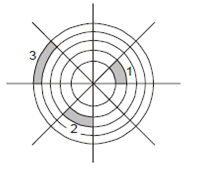 A fotting 2 m × 1 m exerts a uniform pressure of 150 kN/m2 on the soil. Assuming a load dispersion of 2 vertical to 1 horizontal, the average vertical stress (kN/m2) at 1.0 m below the fotting is

A 25 kN point load acts on the surface of an infinite elastic medium. The vertical pressure intensity in kN/m2 at a point 6.0 m below and 4.0 m away from the load will be