Attempt now to get your rank among 262 students!

Consider the statements for a pre tensioned beam

1) There is no loss due to anchorage slip and shrinkage of concrete.

2) There will be no loss if all wires are simultaneously tensioned.

A simply supported prestressed concrete beam is of 25m span. The initial stress is 1000 MPA . The slip in the jack during tensioning has been 2mm. If ES = 200 GPa, the loss of prestress due to anchorage slip is

In a pre-stressed concrete beam section shown in the figure, the net loss is 10% and the final pre-stressing force applied at X is 750 kN. The initial fiber stresses (in N/mm2) at the  bottom of the beam were: 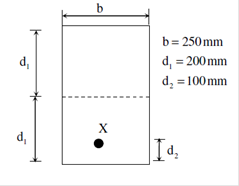 The percentage loss of pre-stress due to anchorage slip of 3 mm in a concrete beam of length 26m, which is post-tensioned by a tendon with as initial stress of 1000N/mm2 and modulus of elasticity equals to 2.1 X 105 N/mm2 is