Attempt now to get your rank among 186 students!

Consider the following statements regarding ductility of bitumen:
1) Ductility is the property which does not permit bitumen to undergo large deformation without breaking.
2) Bitumen with high ductility are generally adhesive but do not have good cementing properties.
3) Ductility must be ascertained at two different temperatures in order to pronounce on the suitability of the material.
Which of the above statements is/are correct?

Two wheel loads 200 kN and 80 kN spaced at 2 m apart move on the span of girder of 16 m. If any wheel load can lead the other, the maximum bending moment that can occur at a section of 6 m from the left end will be

At a point in a material the intensity of resultant stress on a certain plane is 100 MPa as shown in figure which is inclined at 60o to normal of that plane. The stress on the plane at right angle to this plane has normal tensile component of 30MPa. What is the major principal stress? 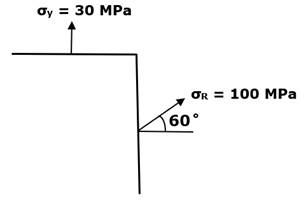 Representative samples of layer of silty clay having thickness of 4m were tested in a consolidometer and the following results were obtained:

If the present average over burden stress of the layer (

) is 60KN/m2 and increase in average stress in the layer is 90KN/m2, Consolidation settlement (in mm) would be

A retaining wall 5m high retains a cohesive soil having C = 20 kN/m2, unit weight 21 kN/m3 and ϕ = 30o. A uniform surcharge acts on the top of the soil. If the total passive earth pressure on the wall is 2260 kN/m; value of surcharge acting on the soil is:

statement (I): Plate load test is not of much relevance for clayey soils.

The maximum velocities in a circular pipe at two points 15 cm apart along the flow are 1.5 m/s and 4 m/s. The average convective acceleration along the middle of the tube if the flow is laminar will be (in m/s­2):

How many impellers are required for a multistage pump to lift 4000lpm against a total head of 80 m at a speed of 750 rpm; given that Ns for each impeller should be between 720 to 780 units?

At the point of collapse, what is the value of horizontal thrust(in kN) at point A in the loaded frame shown in figure below? (Given P = 10kN) 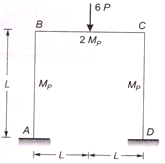 A preliminary survey indicates that 20% of the time of a gang of workers is spent idly. What is the total number of observations required to determine the proportion of idle time with 95% confidence limit? Critical value at this level of confidence is 1.96.

Consider the following statements regarding ‘setting of cement’:
1) Low-heat cement sets faster than OPC.
2) Final setting time decides the strength of cement.
3) Initial setting time of Portland Pozzollona is 30 minutes.
4) Air-induced setting is observed when stored under damp conditions.
5) Addition of gypsum retards the setting time.
Which of the above statements are correct?

The void ratio – pressure diagram for a soil sample is shown below. For this soil match List – I (soil parameter) with List-II (value) and choose the correct option using codes given below: 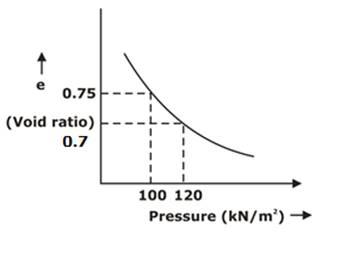 Which of the following are the additional moments considered for design of slender compression member in lieu of deflection
in x and y directions?
Where

are effective lengths in respective directions; D is depth of section perpendicular to major axis; b is width of the member.

A moment of magnitude ‘M’ = 100 kNm is transmitted to a column flange through a bracket by using four 40 mm rivets as shown in the figure.

The shear force induced in the rivet A is 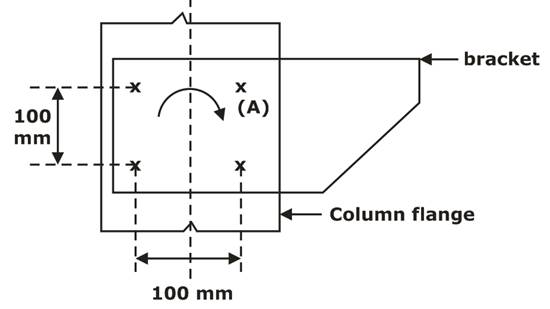 Two vehicles are approaching each other at a right angle to each other at an intersection with a speed of 60 and 40 kmph respectively. Calculate the sight distance required at the intersection to avoid a collision. Take value of coefficient of longitudinal friction equal to 0.35.