Attempt now to get your rank among 347 students!

Find the range of the ball which when projected with a velocity of 22.4 ms-1 just passes over a pole whose height is 6.4m.

A projectile is fire with a velocity u making an angle α with the horizontal, at α = 45ᵒthe range becomes maximum. What will be the maximum range if the projectile is inclined same angle with vertical?

A shell is fired from a gun; the maximum range of gun is 25 kms along horizontal. What will be the muzzle velocity of the shell? (Take g = 10m/s2)

. The ball bounces repeatedly from the ground with the coefficient of restitution less than 1 as shown.

Neglecting air resistance and taking the upward direction as positive, which figure qualitatively depicts the vertical component of ball’s velocity (

The accompanying graph of position

represents the motion of a particle. If

are both positive constants, the expression that best describes the acceleration

of the particle is 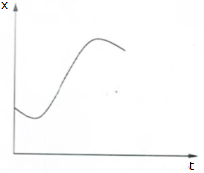 time apart from the same height towards the ground. At a later time

the difference in their speed is

and their mutual separation is

. While both stones are in flight

A man of height h walks in a straight path towards a lamp post of height H with uniform velocity u. Then, the velocity of the edge of the shadow on the ground will be

Avinash KumarMember since Feb 2017
Don't quit, suffer now and live the rest of your life as a champion. -Muhammad Ali
Share this quiz   |