Attempt now to get your rank among 50 students!

A propped cantilever subjected to vertical loading is indeterminate externally of?

A rigid jointed frame with three bays and two stories has two fixed column supports and two hinged. The degree of static indeterminacy of structure is:

Determine the degree of static and kinematic indeterminacy of the frame structure as shown in the figure:

Which of the following statements is true?

B) It can consists of any other shaped intermediate parts, as long as it is stable.

Where m → Number of reactions, j → Number of joints, then the correct set of values {a, b, c} is?

Find Static Indeterminacy of the beam shown below in which AB behaves as a rope:

The kinematic chain shown in the figure below is a:-

The degree of Kinematic indeterminacy of the structure shown below is: 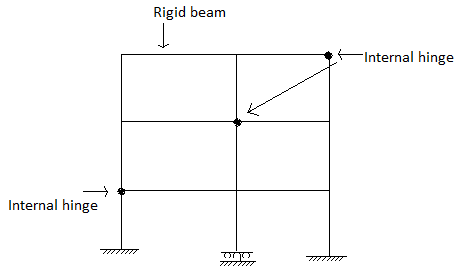 Which of the following statements is true?

A) For instability, at least one joint of the structure should be able to displace without causing change in length of all the members.

B) For instability, at least one joint of the structure should be able to displace without causing change in length of at least one of the members.