Attempt now to get your rank among 419 students!

Figure 3 .1 shows the curve of a hydrograph. 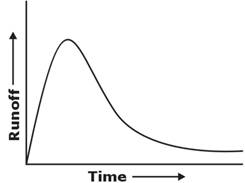 Which of the following would cause the peak of the curve to shift to the right?

1) When the length of the overland flow is more.

2) When the slope of the land surface is less.

4) When the rainfall is moderate.

Select the correct answer using the codes given below.

The peak of a 4 hour flood hydrograph is 240 m3/sec. If the rainfall excess is 80 mm and base flow which is constant is 40 m3/sec, then the peak of 4-hours unit hydrograph will be

The ordinate of the Instantaneous Unit Hydrograph (IUH) of a catchment at any time t, is