Attempt now to get your rank among 662 students!

In Quick Sort when the level alternate between good and bad splits, what will be the worst case time complexity for this algorithm?

Find the complexity T(n) for the following recurrence relation.

Which of the following procedure is suitable to find the longest path from a given vertex to any other given vertex in a directed acyclic graph (weighted) with few negative edge weights.

Consider the travelling salesman problem applied over a network of cites having 6 cites depicted though a graph. If we use dynamic programming approach, then the number of unique subproblems are _______.

Which of following is true for greedy strategy?

Consider the following data for job sequencing with deadline problem for 9 jobs (n = 9):

Which of the following is correct job sequence for minimizing the penalty?

Find the number of spanning trees for the following graph : _______

Match the pairs in the following question:

Find the complexity of the following algorithm. 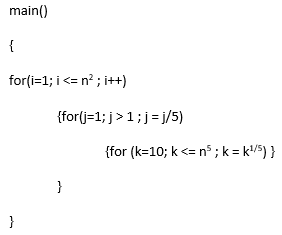 Consider a hash table with 10 slots in which 6 slots are filled already. Now two more keys needs to be inserted one after the other. What is the probability that during the insertion of these two keys , the first key doesn’t suffer from collision but the second key suffers from a single collision __________.

Consider the hashing function h(k)=k mod 7. The number of collisions with linear probing for the insertion of the following keys 29, 36, 16, 30.

Consider an array consisting of the following elements in unsorted order (placed randomly), but 60 as first element.
60, 80, 15, 95, 7, 12, 35, 90, 55
Quick sort partition algorithm is applied by choosing first element as pivot element. How many total number of arrangements of array integers is possible preserving the effect of first pass of partition algorithm.