Attempt now to get your rank among 373 students!

In the conjugate beam, the bending moment at a section gives , for the actual beam,

The forces required, in N, to produce  1m displacement (translation without rotation) at either one- third point of a fixed beam of span l and of uniform flexural rigidity EI is if EI=1N-m2 and l = 1m.

A loaded portal frame is shown in figure. The profile of its bending moment diagram will be

Match List-I with List-II and select correct answer using the code given below the lists:

Which of these statements is correct?

The principle of superposition is applicable to

The flexibility matrix coefficient 11 and 21 respectively for the beam shown in fig. w.r.t. the coordinate system is-

For the structure shown below, the slope deflection equation of the member BA i.e. MBA 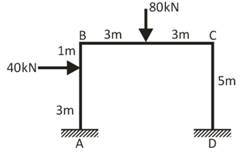 In the graphical determination of stresses in the member of a loaded plane truss what is the correct sequence from the following steps.
1. To determine the end reaction vector diagram.
2. Space diagram
3. Stress diagram.

A three hinged parabolic arch of rise 5 m is subjected to uniformly distributed load throughout its length, so that horizontal thrust is 25kN. Due to an increase in temperature, if the crown rises by 10 cm. Then horizontal thrust _____

A cable of insignificant weight, 18 m long, is supported at its two ends, 16m apart, at the same level. The cable supports at its mid-reach a load of 120 N. The tension in the cable is nearly 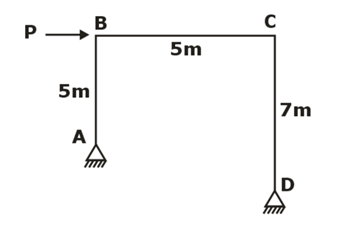 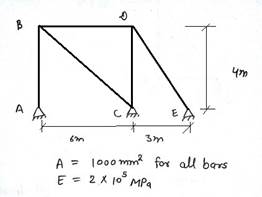