Attempt now to get your rank among 14 students!

A vector magnetic potential is given by

. The magnetic flux density at

Consider the following statements regarding position and laplace equation:

The dielectric constant of the medium is

If a manufacturer produces a ferrite material with

and σ = 10-6 S/m at a frequency of 10MHz, then the phase difference (in radian) between two points separated by 2m is approximately equal to

For a medium with intrinsic impedance of

the modulus of ratio of conduction current and displacement current will be _________. (Correct upto 2 decimal places)

kv/m exists for Z ≥ 0, Find the angle made by transmitted wave with the interface in degree.

. The coordinate of the points O, P & Q one given in Cartesian coordinate system. Evaluate the line integral as

along the path OPQ. 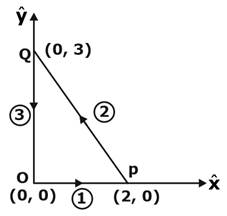 of a plane wave propagating in free space is given by