Attempt now to get your rank among 85 students!

Identify the diagram that best represents the relationship among classes given below
Seeds, leaves, branches, roots

Six persons A, B, C, D, E and F are sitting in a line. E is between D and F. A is second to the right of F. C is at extreme right. Who is sitting at second place to the left of C?

Two statements are followed by three conclusions numbered I, II and III. Assuming the statements to be true, even if they do not conform to real-world knowledge, decide which of the conclusion(s) logically follow/s from the statements.

All ponds are pools.

Some wells are ponds.

I. Some ponds are not wells.

II. Some wells are pools

III. All pools are wells.

If the triangle represents chicken, circle as fish and square as meat. Which number can be indicated as the people who consume chicken and meat only.

Statement:
1. No Triangle is a rectangle.
2. All Spheres are Triangles.

Conclusions:
I. All Spheres are Rectangles.
II. No rectangle is a sphere.
III. Some sphere are rectangle.

The following Venn Diagram shows information about the person who studies for a different exam. 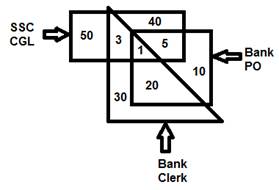 The person who studies for only bank PO and SSC SGL but not bank clerk?