Attempt now to get your rank among 184 students!

How many of the following CFGs generates a CFL but not regular?
(i)

The above PDA is accepting which of the following language : 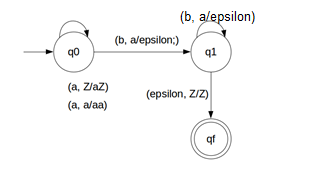 We want to check whether the string a4b4 belongs to the language L or not. A single move in PDA causes 5 nanoseconds delay. Find the total delay in nanoseconds to check the membership of the string.

[Example: In above table

How many of the above language

are subset of the language L where L is the language accepted by the given PDA?(Assume PDA acceptance is by empty stack method)

What is the size of stack required to accept a string of pattern anbn if n = 13?