Attempt now to get your rank among 139 students!

In Quicksort, which of the following is true?

i) Ideal for sorted array

ii) Works best when input is not almost sorted.

iv) Better than insertion sort for every type of input.

The mechanism involves in direct searching is:

Which of the following sorting methods will be best if number of swapping done, is the only measure of efficiency?

Match the pairs in the following question:

Suppose we represent a graph G having n vertices and m edges with the edge list
structure. What is the running time of insertVertex method and the removeVertex method respectively?

Consider an open address hash table with uniform hashing. Out of 10 locations, 8 are occupied. What are the expected number of probes in an unsuccessful and successful search respectively?

Which of the following cases is definite to give

time complexity always for quick sort to sort the array A[0...n], for any set of values of array A.
Case 1: Choosing middle element as pivot.
Case 2: Choosing pivot element as

element of array A and so on.
Case 3: Choosing median element as pivot.
Case 4: Choosing the pivot element randomly from the array A.
Case 5: Choosing pivot such that the array is partioned into almost two equal subarrays.

Consider the following symbols and their frequency in a specific document

Statement 2. While dealing with set of strings, multidimensional arrays are space efficient than the array of pointers.

Statement 3. Initialization of an external variable goes only with the definition.

Number of statements that are correct ____.

In case of quicksort best case, 45 seconds is taken by input size 128 to run. In 4 minutes what size of input can be sorted (In nearest Power of 2)?

I. Merge Sort procedure is bottom-up

II. Insertion Sort is efficient for sorting a small number of elements

III. Output is also called the instance of a program

Find the number of correct statements from the above statements. 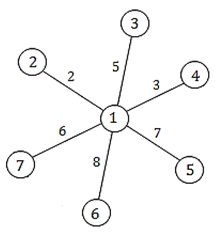