Attempt now to get your rank among 334 students!

An ideal n–channel MOSFET has the following parameters : mobility of electrons

The ratio of current for forward biased mode with voltage 0.05 V to the current with same magnitude of reverse bias mode is _______

The figure shows two signal x(t) and h(t) as

Which of the waveforms in the option corresponds to convolution x(t) *h(t)?

The input to a linear delta modulator having step-size δ = 0.628 is a sine wave with frequency fm and peak amplitude Am. If the sampling frequency fs = 40 kHz, the combination of the sine wave frequency and the peak amplitude, where slope overload will take place is

The state space representation a system is

the response of y(t) is

What is reduced expression for following.

, then find the determinant of

The value of the contour integral

In the given oscillator circuit, find the values of C1 and C2 that would make the bridge balanced 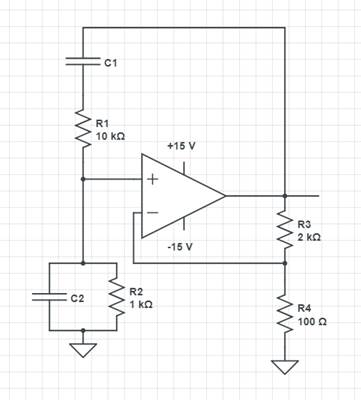 Assuming that all other device parameters are identical, kT/q = 26 mV, the intrinsic carrier concentration is

A dc voltage of 10 V is applied across an n-type silicon bar having a rectangular cross-section and a length of 1 cm as shown in figure. The donor doping concentration ND and the mobility of electrons 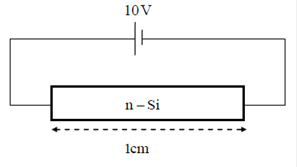 A/V2, VT=0.7 V and tox=0.4 nm. It is found by measurement that it is operating in saturation region. The power dissipated in the MOSFET is 36 mW and VDS=6V. the aspect ratio for the MOSFET when VGS =5 V is

Consider an amplitude modulated signal with a message signal m(t) and carrier frequency ‘fc’ as follows:

If the modulation index of this AM signal is 0.81, then the peak amplitude of the message signal m(t) is equal to ____ V. (upto two decimal points)

In a PCM system, message signal

,is divided into 50 equal intervals in quantization mechanism. Signal to quantization noise ratio of PCM system is __________.

The Nyquist plot of a unity negative feedback is shown below. If the corresponding open-loop system is stable, then the closed loop system will be stable for which values of K? 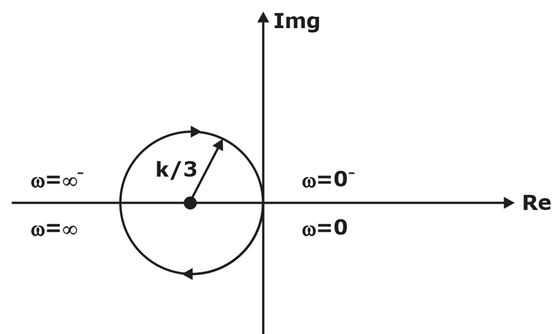 Where p is an integer, is connected in unity feedback configuration as shown in figure.

Given that the steady state error is zero for unit step input and is 6 for unit ramp input, the value of the parameter p is ____.

Determine the new inductance of a solenoid, if a solenoid has 2 times increased length, and half times decreased radius.(Given, inductance= 15mH).

A load resistance RL is to be connected between a, b such that power transferred to the load RL is maximum. The value of RL is ________Ω.

A network is described by the state model as

Let P be linearity, Q be time–invariance, R be causality and S be stability, A discrete time system has the input–output relationship.

where x(n) is the input and y(n) is the output. The above system has the properties