Attempt now to get your rank among 44 students!

A test specimen with cross-sectional area A and applied load P in x direction is shown. What will be the correct expression for the strain in the transverse (y) direction if the axial load is applied. 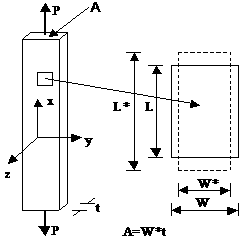 What will be the value of force at points B and C, if the force of 400N is acting upward at point A.

A person who weighs 600 N steps onto a scale that is on the floor of an elevator. If the elevator accelerates downwards at a rate of 6 m/s2, the scale will read ( take g=10 m/s2)

Weight of 50kg is held on a smooth plane, inclined at 30

to the horizontal by a force P acting 30

above the plane as shown in the figure below. The normal reaction of the plane on the weight will be:

A block slips on a rough horizontal floor, moves with a deceleration of 3 m/s2. The kinetic friction between block and floor is close to

When a body slides down an inclined surface, the acceleration (f) of the body is given by:-

Two buses of unequal masses use similar tyres. If they are moving at same initial speed, the minimum stopping distance (Consider braking force applied to be the same for both the buses )

A land leveler having mass m and diameter 500 mm moves on a step which is 30 mm in height as shown. The leveler is either pushed or pulled and makes 0.2 as a coefficient of friction between roller and grounD. Select the correct free body diagram of the leveler.

AB is the bar with its weight as 100 N and length 6 m as shown in figure which rests on a roller at point D while end A of the bar rests on a vertical wall. What angle will the bar makes with horizontal? 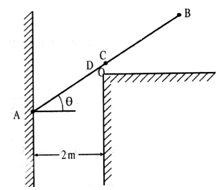