Attempt now to get your rank among 44 students!

When a body slides down an inclined surface, the acceleration (f) of the body is given by:-

A aluminium wheel of diameter 200 mm carries a load of  800 N .If  200 N force  required at center to roll the wheel .  calculate the coefficient of rolling friction.

A body of mass (M) 10 kg is initially stationary on a 45 ° inclined plane as shown in figure. The coefficient of dynamic friction between the body and the plane is 0.5. The body slides down the plane and attains a velocity of 20 m/s. The distance travelled (in meter) by the body along the plane is 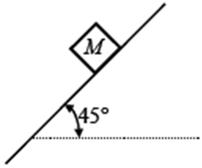 A body is resting on a plane inclined at angle 30

to horizontal. What force would be required to slide it down, if the coefficient of friction between body and plane is 0.3?

A given object takes n times more time to slide down a 45o rough inclined plane as it takes to slide down a perfectly smooth 45o incline. The coefficient of kinetic friction between the object and the incline is :

A block of mass m rests on an inclined plane and is attached by a string to the wall as shown in the figure. The coefficient of static friction between the plane and the block is 0.25. The string can withstand a maximum force of 20 N. The maximum value of the mass (m) for which the string will not break and the block will be in static equilibrium is ____________ kg.
Take cosθ = 0.8 and sinθ = 0.6.
Acceleration due to gravity g = 10 m/s2

A truck accelerates up a 100 incline with a crate of 100 kg. Value of static coefficient of friction between the crate and the truck surface is 0.3. The maximum value of acceleration (in m/