Attempt now to get your rank among 251 students!

Consider the figure shown below:

The oscillator circuit shown in figure has n ideal inverting amplifier. Its frequency of oscillation (in Hz) is

is connected in unity feedback configuration as shown in the figure.

In the circuit shown in figure, A is a parallel in, parallel–out 4–bit register, which loads at the rising edge of the clock C. The input lines are connected to a 4–bit bus, W. Its output acts as the input to a 16 × 4 ROM whose output is floating when the enable input E is 0. A partial table of the contents of the ROM is as follows : 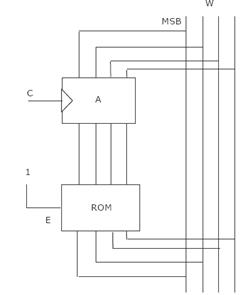 For an 8 feet (2.4 m) parabolic disk antenna operating at 4 GHz, the minimum distance required for far field measurement is closest to

C-V characteristics of silicon MOS capacitor having an area of 10-4 cm2 is shown. The permittivity’s of silicon and SiO2 are respectively 10-12 F/cm and 3 .5 x 10-13F/cm, then maximum depletion layer width in silicon is

Which of the following is error correcting code?

The hole lifetime is