Attempt now to get your rank among 583 students!

A fixed end beam is subjected to a load W at

span from the right support as shown in figure. The collapse load of the beam is

A 12 mm thick-bracket plate is used to transmit a reaction of 125 kN (factored load) at an eccentricity of 75 mm from the column flange. If depth of column is 150 mm, then the bending stress developed will be ________ N/mm2.

with horizontal. The tension

in the string is 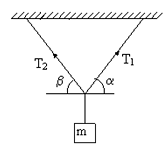 The sum of magnitude of two forces acting at a point is 16N. If their resultant is normal to the smaller force and has magnitude of 8 N, than the forces are

Velocity of a particle in a curvilinear path varies with as

where t is in seconds. The radius of curvature of path at t = 1s is

Figure shows a small block of mass 10 kg kept at the left end of a larger block of mass 20 kg and length 2 m. The system can slide on a horizontal road. The coefficient of friction between the road and 20 kg block is 0.4 and that between the blocks is 0.2. If the system is started towards right with an initial velocity of 2 m/s then the time taken by smaller blocks to separate from bigger block is (acceleration of 10 kg block

A train moving with a velocity of 100 km/hr and has constant velocity. The train is carrying 800 passengers. The weight of the train and avg. passengers is 1100 tonnes and 65kg. The passengers seating on their seats in the train will experience,