Attempt now to get your rank among 189 students!

Direction: From the given alternative select the word which cannot be formed using the letters of the given word.
ENCOURAGEMENT

Select the set of numbers that is similar to the following set.

In the following Venn diagram, the ‘Rectangle’ stands for ‘Judges’ , the ‘Triangle’ stands for ‘Males’ , and the ‘Hexagon’ stands for ‘Golf players’ , The given numbers represent the number of persons in that particular category. How many male judges are there in total? 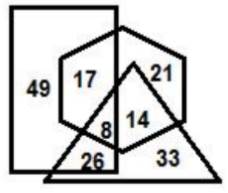 Select the correct alternative to indicate the arrangement of the following words in a logical and meaningful order.

Three of the following four letter-clusters are alike in a certain way and one is different. Pick the odd one out.

In a certain code language, ‘CLAY’ is written as ‘FODB’. What will be the code for ‘FROG’ in that code language?

Supriya is playing chess with Pallavi. If Supriya is facing North direction, in which direction Pallavi is facing considering the standard chess seating position?

Mathur's uncle's daughter's brother is Salmi. How is Salmi related to Mathur?

Directions: Study the following information carefully and answer the questions given below.

Income and Expenditure (in Rs thousand) of a company during seven years is given. 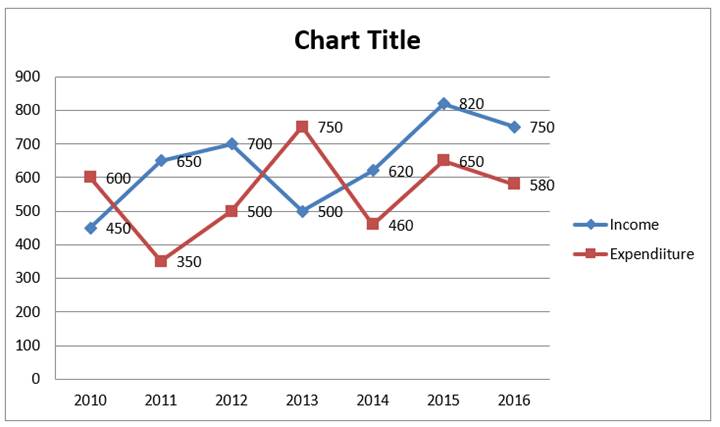 How many cubes each of edge 5 cm can be cut from a cube of edge 35 cm?

Which of the given surds is smallest

A number is formed by two digits, one digit is 2. If sum of number and the number formed by interchanging its digits is 88, then what is the second digit of number?

A train is moving at a speed of 90 km/hr. How many seconds will it take to cover a distance of 2275 meter?

In how much time will the simple interest on a certain sum of money be 34/25 times the sum at 17% per annum?

Alloy A contains metals x and y only in the ratio 5:2 and alloy B contains these metals in the ratio 3:4. Alloy C is prepared by mixing A and B in the ratio 4:5. The percentage of x in alloy C is: