Attempt now to get your rank among 104 students!

Statements:
All wheat is bread.
All bread is pulses.

Conclusions:
I. No pulses is wheat.
II. All bread is wheat.

Conclusions :
I. Some books are poems.
II. Some poems are novels.

Read the given statements and conclusions carefully. Assuming that the information given in the statements is true, even if it appears to be at variance with commonly known facts, decide which of the given conclusion logically follow(s) from the statements.

All roads are cycles.

No cycle is a car.

I. Some cycles are roads.

When the following figure is folded to form a cube, how many dots lie opposite the face bearing three dots?

Select the box that CAN be formed by folding the given unfolded box.

In the given figures what will come opposite to face containing ‘>’. 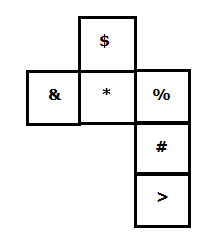 Three different positions of the same dice are shown, the six faces of which are numbered from 1 to 6. Select the number that will be on the face opposite to the one showing ‘6’.

Two different situations of the same dice are shown. If the number 4 is on the lower board, then what will be the number on the upper board?

Which of the following are members of the same team?

Eight friends A, B, C, D, E, F, G and H are sitting at equal distances from each other in the same sequence around a circular table in clockwise direction facing the centre. If D is facing southwest, then who is sitting third to the right of H?

A train can travel 25% faster than a car. Both start from point A at the same time and reach point B 165 km away at the same time. On the way the train takes 40 minutes for stopping at the stations. What is the difference in the speeds (in km/hr) of train and car ?

A train travelling at the speed of x km/h crossed a 300 m long platform in 30 seconds, and overtook a man walking in the same direction at 6 km/h in 20 seconds. What is the value of x ?

The speed of two railway engines is in the ratio 5 : 4. If they move on parallel tracks in the same direction and if the slower engine is ahead of the faster engine by 8 km when the latter starts, then how far will the faster engine have to travel before it overtakes the slower one?

Two trains running in opposite directions on parallel tracks, at speeds of 42 km/h and 57 km/h, take 18 seconds to cross each other. If the length of one train is 270 m, then the length of the other train is:

A train of length 230 m has to cross a platform of length 750 m. If the speed of the train is 72 km/h, then find the time taken by train to cross the platform.

One-fifth of a journey is covered at a speed of 30 km/h, one-fourth of the journey at a speed of 25 km h and the rest at 60 km/h. What is the average speed (in km/h, correct to one decimal place) for the whole journey?

Two cars travel from city A to city B at a speed of 42 and 60 km/hr respectively. If one car takes 2 hours lesser time than the other car for the journey, then the distance between City A and City B is :

Rahul and Mithun travel a distance of 30 km. The sum of their speeds is 70 km/h and the total time taken by both to travel the distance is 2 hours 6 minutes. The difference between their speeds is:

If the volume of a sphere is

cm3, then its radius is:

The sum of the radius of the base and the height of a closed solid cylinder is 12.5 cm. If the total surface area of the cylinder is 275 cm2, then its radius is:

The height (in cms) of the prism is