Attempt now to get your rank among 98 students!

Rahul is 9 ranks ahead of Shubham in a class of 41 if Shubham’s rank is 12th from the last. What is Rahul rank from the start?

In a group of five friends A,B,C,D,E, B is younger to C but elder to A. If they are arranged in ascending order of age, then D gets fifth rank, who is the youngest in age?

Among A, B, C, D and E each one has secured different marks in an examination.

Who among them secured second highest marks?

Three different positions of the same dice are shown. Find the number on the face opposite the face having '3'?

Three positions of a cube are shown below. Which numbers will come on two faces marked ‘A’ and ‘B’?

Which of the following cubes can be formed by folding the given figure? 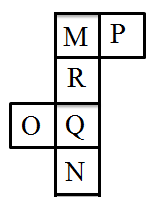 Select the cube that can be formed by folding the given sheet (unfolded box) along the lines.

Pointing to a lady, Raj said, "She is the only daughter of the brother of my mother's father-in-law". How is the lady related to Raj?

B and D are cousin brothers. A is the father of B and the uncle of C, who is the sister of D. C’s mother is married to E, who is the brother of A. How is B related to C’s father?

U's daughter X is the daughter-in-law of V. W is the son of V's daughter. How is W related to X?

The difference between the compound interest on a sum of Rs.8,000 for 1 year at the rate of 10% per annum, interest compounded yearly and half yearly is:

What is the compound interest (in Rs) on Rs 2400 at the rate of 20% per annum compounded yearly for 2 years?

What is the difference (in Rs.) between compound interest and simple interest for 3 years on a principal of Rs. 1000 at the rate of 20% per annum?

Rishabh drives a cycle at a rate of 18 km/hr , but stops for 5 minutes to change cycle at the end of every 7 km. The time taken by him to cover a distance of 180 km is :

Two trains 150m and 120 m long respectively moving from opposite directions cross each other in 10 secs. If the speed of the second train is 43.2 km/hr, then the speed of the first train is

A Student goes to school at the speed of

and reaches 6 min late. If he travels at the speed of 3 km/h, he reaches 10 min early. The distance (in km) between the school and his house is

A, B and C together can complete a work in x, 30 and 45 days, respectively. B and C worked together for 6 days. The remaining work was completed by A alone in 12 days. The value of x is:

Working together A. B and C can complete a piece of work in 3 days. A completes the same work in 24 days and B completes it in 6 days. How many days will C alone take to complete the same work?

Raju can finish a piece of work in 20 days. He worked at it for 5 days and then Jakob alone finished the remaining work in 15 days. In how many days, can both finish it together?