Attempt now to get your rank among 777 students!

Select the set of classes, the relationship among which is best illustrated by the following Venn diagram.

Select the Venn diagram the best illustrates the relationship among the following classes.

In the following Venn Diagram, shows information about the person speak languages. 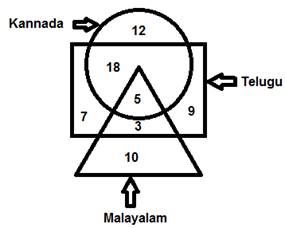 The person who speaks the Malayalam language?

Identify the diagram that represents the relationship among the given classes.

Identify the Venn diagram that best represents the relationship between the given classes.
Loudspeaker, Sound, Stereo

Choose the correct signs from the options that will make the equation true.

Which option gives the two signs that need to be interchanged to make the given equation correct?

In the following questions, select the number which can be placed at the sign of question mark (?) from the given alternatives.

Select the number that can replace the question mark (?).

The difference of simple interest on sum of money for 8 years and 10 years is ₹200. If the rate of interest is 10% p.a, then what is the sum of money?

A certain sum becomes 5 times in 3 years, at simple interest, then in how many years will it become 15 times at the same rate?

Find the difference between the compound interest and the simple interest on 32,000 at 10% p.a. for 4 years.

A person deposits ₹8000 in a bank which pays 8% p.a. simple interest. The amount after 8 years will be:

per annum for a period of 8 months?

Two numbers A and B are, respectively, 80% and 20% more than a third number C. The ratio of the numbers A to B is: