Attempt now to get your rank among 1185 students!

Match List I with List II, and select the correct answer by using the codes given below the lists:

Select the correct code:
1). Indus valley civilization was though very advanced and urbanized, but there is no evidence of existence of music there.
2). Richas, the Vedic hymns, were well written down in Shruti literature to carry forward them from one generation to the other.

Consider the following about Mughal architecture:
1). Shahjahan’s reign was the Golden age in Mughal architecture and he was called the Engineer and the Architect for his technical perfection.
2). A new technique called Petra durra (inlaid mosaic work) was introduced for the first time under Shahjahan.
Which of the above is/are correct?

Match List I (Acts of Clonial Government of India ) with List II (Provisions ) and select the correct answer using the codes given below the lists . 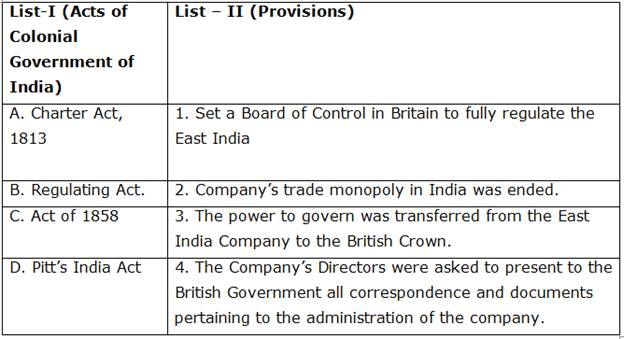 In ancient Indian Buddhist monasteries a ceremony called Pavarana used to be held. It was the