Attempt now to get your rank among 3162 students!

At present, there are about 130 million hectares of degraded land in India. Water erosion, wind erosion, over mining, over grazing, deforestation are one of the major factors for this loss. Based on these factors consider the following types of wastelands in India-
1). Water Eroded area
2). Forests degraded area
3). Saline and Alkaline area
4). Wind Eroded area
Arrange these types in ascending order of their percentage share

What do you understand by “Maunder Minimum”?

In which one of the following Union Territory, do the people of the Onge tribe live?

W.r.t Exfoliation, which of the following is/are correct?
1) Exfoliation is the process that can occur due to expansion and contraction induced by temperature changes.
2) Exfoliation domes and tors result due to unloading and thermal expansion respectively.

Match the following Minor tectonic plates with their associated regions:

Which of the following is/are true about Transform Boundaries?
1) Transform faults are the planes of separation generally parallel to the mid- oceanic ridges.
2) Eruptions do not take all along the entire crest at the same time.
3) The rotation of the earth has its effect on the separated blocks of the plate portions.

India’s population growth during the 20th century can be classified into four distinct phases. Match List I (Period) with List II (Phase) and select the correct answer using the codes given below the lists. 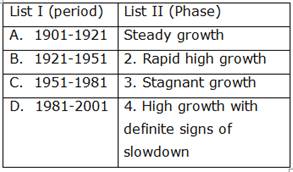