Attempt now to get your rank among 612 students!

has a eigen vectors as

. Find the corresponding eigen values for the given eigen vectors.

The rod PQ of length

, and uniformly distributed mass of M=10 kg, is released from rest at the position shown in the figure. The ends slide along the frictionless faces OP and OQ. Assume acceleration due to gravity, g=10 m/s2. The mass moment of inertia of the rod about its centre of mass and an axis perpendicular to the plane of the figure is (ML2/12). At this instant, the magnitude of angular acceleration (in radian/s2) of the rod is _____ 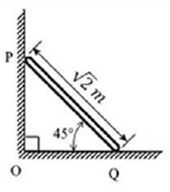 The bar graph given below shows the per acre yield (in kg) of different countries. Study the graph carefully and answer the questions 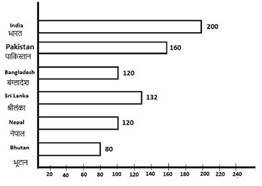 Select the most appropriate option to fill in the blank.
The severe thunderstorm caused ________ damage that recovery would take years.

In a mixture of 150 liters oil, 80% is petrol and rest are diesel. How much more diesel should be added so that, petrol become 75% in the new mixture?

Select the most appropriate option to fill in the blank.

Every evening, they used to sit down for dinner and _________ before eating their meal.

A function f of the complex variable

P(0,3), Q(0.5, 4), and R (1,5) are three points on the curve defined by f(x). Numerical integration is carried out using both Trapezoidal rule and Simpson‟s rule within limits x = 0 and x =1 for the curve. The difference between the two results will be.

A probability density function is of the form

The value of K is

If a ball which is dropped from a height of 2.25 m on a smooth floor attains the height of bounce equal to 1.00 m, the coefficient of the restitution between the ball and the floor is equal to:

A force F has magnitude of 15 N. Direction of F is at 37° from negative x-axis towards positive y-axis. Represent F in terms of