Attempt now to get your rank among 701 students!

Consider the following sequence of instructions:

Which one of the following expressions does NOT represent exclusive NOR of x and y?

The orange box in the below figure consists of a minimum complexity circuit that uses only AND , OR and NOT gates. The function f(x,y,z) = 1 where any of the following conditions are satisfied :

Then which of the following equations leads to correct design for the minimum complexity circuit :

If a 64x1 Mux is constructed using 4x1 Mux, then how many of the 4x1 Mux are required at 2nd level (consider level start from 1).

Consider a code converter as shown in a figure -

Consider the following circuit. A = a2a1a0 and B = b2b1b0 are three bit binary numbers input to the circuit. The output is Z = z3z2z1z0. R0, R1 and R2 are registers with loading clock shown. The registers are loaded with their input data with the falling edge of a clock pulse (signal CLOCK shown) and appears as shown. The bits of input number A, B and the full adders are as shown in the circuit. Assume Clock period is greater than the settling time of all circuits. 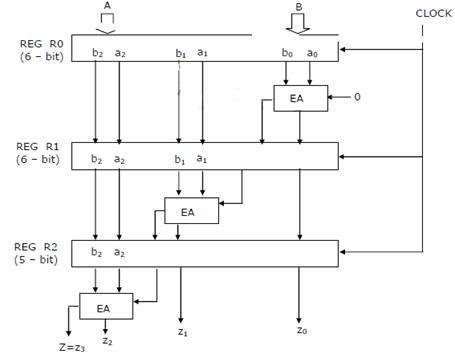 A decimal number has 18 digits, The number of bits needed for its equivalent binary representation is(Approximately)?

Where the position of the binary point is between

is the most significant bit. Some of the decimal numbers listed below cannot be represented exactly in the above representation:
i. 31.500 ii. 0.875
iii. 12.100 iv. 3.001
Which one of the following statements is true?

How many of following statements are true?

A) Function must be neutral function is a necessary as well as sufficient condition for a function to be a dual function.

B) For a n variable function, there are 2n-1 mutually exclusive pairs. 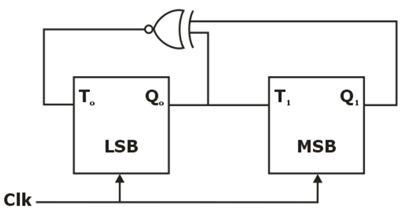 What can be said about above counter? If the initial states are reset. 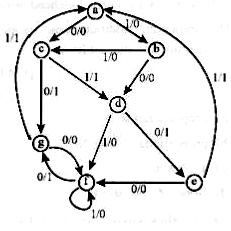 How many states the sequential circuit has?