Attempt now to get your rank among 332 students! 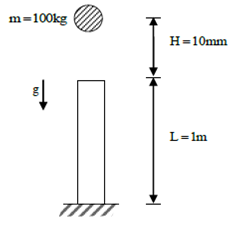 The figure shows a state of plane stress. If the minimum principal stress is –7 MPa, then what is the value of σx ? 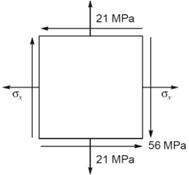 Two metal balls travelling at velocities v1 and v2 respectively collide with each other. Velocity of first ball before the impact was greater than second.

Considering it as a direct central impact, the velocities after the collision will be;

A steel tube having outside and inside diameter of 100 mm and 60 mm respectively is bent in to the form of a quadrant of 2 m radius as shown in figure. The vertical deflection of the free under this load [Given E = 200 GPa] 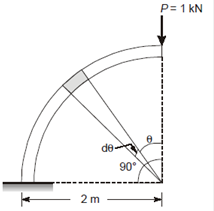 On an inclined plane the cylinder rolls down whose mass is 5Kg and radius 0.7m. determine the rotational kinetic energy when it reaches to foot of the plane if the height of inclined plane is 6m. take g=10m/s2.

Find the maximum value of

in the situation shown in figure below so that the system remains at rest. Coefficient of friction at all surface of contact is

. Pulley provided is smooth and tan

The question has FOUR options. ONLY ONE of these four options is the correct answer
A constant force acting on a particle of mass 2kg is given by

A stone is dropped from a balloon going up with a uniform velocity of 10 m/s. if the balloon was 40 m high when the stone was dropped, the height of balloon from the ground when the stone hits the ground is (take g = 10 m/s2)

The question has FOUR options. ONLY ONE of these four options is the correct answer.


The potential energy for a conservative system is given by

where a and b are positive constants.

Where is the equilibrium point situated?

For the rod as shown in figure, the factor of safety according to maximum distortion energy theory is

A uniform block weighing 500 kg is constrained by three wires. The tension in wire DB(in kg) will be

The ratio of power transmission capacities of a solid and hollow circular shaft when they are rotating at the same rpm. Given that material, weight and length are same for both the shafts and k is the ratio of inner to outer diameter of the hollow shaft.

The question has FOUR options. ONLY ONE of these four options is the correct answer.
A rigid body rotates about a fixed axis with variable angular velocity equal to α -βt at time t where  α and β are constants. The angle through which it rotates before it comes to rest is

The triangular shaped framed structure is 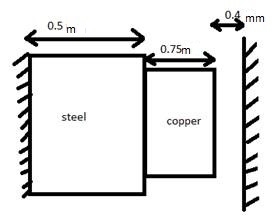 Match the following criteria of material failure, under biaxial stresses ï1 and ï2 and yield stress ïy, with their corresponding graphic representations: 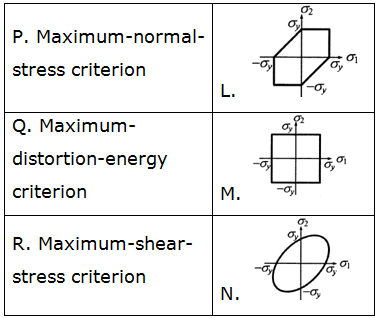