Attempt now to get your rank among 189 students!

Find the number of correct statements from the following sentences:

I. All 1:M and 1:1 relationships should be converted into separate tables.

II. All multi valued attributes should be converted into separate tables.

III. Cardinality ratio is applicable for only binary relationships.

IV. A key attribute can uniquely identify an entity from an entity set.

The number of tables present in its 2NF decomposition are _______.

There are 2 transactions T1 with 2 instructions and T2 with 5 instructions. Find the sum of serial and concurrent  schedules.

Given a basic ER and Relational model then which of the following is incorrect:

A functional dependency B -> A is trivial then which of the Following is true?

E-R modeling technique is a:

Given a relation is in 3NF, Which of the following can be inferred from this?

From the following instance of relational schema R (A, B, C), We can conclude that: 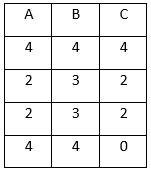 p and q are conditions and R is relation schema then which of the following option is/are valid?

Consider the following B-Tree of order 5:

Suppose we insert node 8 into the B-Tree. Then what will be the sum of all the keys in the extreme left node on the leaf level of the tree?

A bit-stuffing based framing protocol uses an 8-bit delimiter pattern of 01111110. If the output bit-string after stuffing is 01111100101, then the input bit-string is

Consider a classless Inter Domain Routing(CIDR) representation of a network as 100.1.2.35/28. The number of hosts that are representable in this network is

Which of the following is false?

In ISO-OSI reference model, FTP corresponds to which one of the following layers?

Suppose in a building there are 20 people communicating with each other using Symmetric key. Then the pairs of keys that are required in order to authenticate their communication.

Value of C and A consider if data is being not copied due to error as destination host detected it.

Assume that a sliding window protocol is designed for a 1Mbps point to point link to destination, which has a one-way latency of 1.25 sec. Assuming that each frame carries 1 kB of data, what is the minimum number of bits needed for the sequence number?

If RL meant for ring latency, Bw for bandwidth, N for no. of stations, THT for token holding time, b for bit delay. Then what will the correct expression for maximum token return time (TRT).

If token holding time is 10ms, bandwidth is 4 Mbps, then maximum frame size in early token reinsertion (in bytes)?