Attempt now to get your rank among 222 students!

A transformer has an efficiency of 80%. It is connected to a power input of 4 kW and 100 V. if the secondary voltage is 240 V, then the secondary current is

A sonometer wire resonates with a given tuning fork forming stationary waves with 5 antinodes, between 2 bridges, when a mass of 9 kg is suspended from the wire. When the mass is replaced by another mass m, the wire with the same tuning fork forms three antinodes, for the same position of the bridges. The value of m is

In a decay process A decays to B,

Two graphs of number of nuclei of A and B versus time is given ,then which of the following option is incorrect:

The maximum current in a galvanometer can be 10 mA. It’s resistance is 10Ω. To convert it into an ammeter of 1 Amp. A resistor should be connected in

A small circular wire loop of radius a is located at the centre of a much larger circular wire loop of radius b as shown above (b> >a). Both loops are coaxial and coplanar. The larger loop carries a time (t) varying current I = I0 cos ωt where I0 and ω are constants. The large loop induces in the small loop an emf that is approximately equal to which of the following.

A point object is released at t = 0, from a point A (0, 24 m) as shown in the figure. The plane mirror is fixed at angle 45o from vertical. Distance between the object and image will be 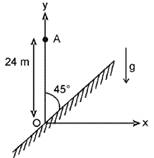 Four wire A, B, C and D each of length

and each of area of cross section is 0.1 m2 are connected in the given circuit. Then, the position of null point is 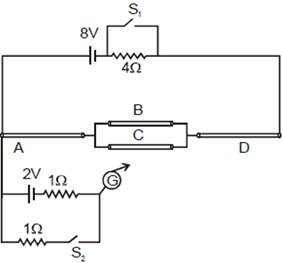 A carrier wave has power of 1675 kW. If the side band power of a modulated wave subjected to 60%. Then find the amplitude modulation level