Find the moment of inertia of the disk with inner radius 5 cm and outer radius 10 cm about an axis perpendicular to the plane and passing through a point 3cm from the center. Mass of the disk is 10 kg.

The moment of inertia of a circular loop of radius R, at a distance of R/2 around a rotating axis parallel to horizontal diameter of loop is 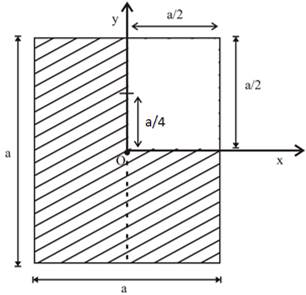 A uniform rod AB of length l and mass m is free to rotate about point A. The rod is released from rest in the horizontal position. Given that the moment of inertia of the rod about A is

, the initial angular acceleration of the rod will be :

A tube of length L is filled completely with an incompressible liquid of mass M and closed at both the ends. The tube is then rotated in horizontal plane about one of its ends with a uniform angular velocity

. The force exerted by the liquid at the other end is

. They are brought into contact face to face coinciding the axis of rotation. The expression for loss of energy during this process is:-

A wheel has angular acceleration of 3.0 rad/s2 and an initial angular speed of 2.00 rad/s. In a time of 2 s it has rotated through an angle (in radian) of :

A 0.5 kg ball moving with a speed of 12 m/s strikes a hard wall at an angle of 30 ° with the wall. It is reflected with the same speed and at the same angle. If the ball is in contact with the wall for 0.25 s, the average force acting on the wall is :

The fraction of void available in a primitive unit cell is:

Copper has a face-centred cubic structure with a unit-cell edge length of 3.61Å. What is the size of the largest atom which could fit into the interstices of the copper lattice without distorting it?

(Hint : Calculate the radius of the smallest circle in the figure)

Aromatic aldehydes undergoes condensation on heating with an ethanolic solution of KCN. This reaction is called as

Identify the final product formed in the following sequence of reactions?

End product of following sequence of reaction is

Which of the following will not show mutarotation?

intersect in 2 distinct points Then:

Find the equation of the parabola, which is symmetric about the y-axis and passes through the point P(2, -3).

If the reciprocal and modulus of a complex number are

and √13 respectively, then its conjugate will be

What is the sum of all three-digit numbers that can be formed using all the digits 3,4 and 5, when repetition of digits is not allowed?

Direction: The question has FOUR options. ONLY ONE of these four options is the correct answer.
The principle value of sin–1

If the quadratic equations

have a common root, then the value of

The eccentric angle of the point (2,