Attempt now to get your rank among 45 students!

Consider the set of 3 processes whose arrival time and burst time are given below: 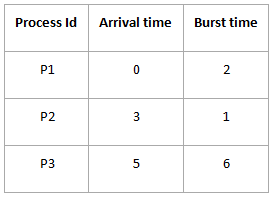 If the CPU scheduling policy is FCFS, calculate the idle time of the CPU.

What is the role of short term scheduler?

Which of the following scheduler may starve a process?

Assume time quantum of RR scheduler is greater than longest CPU burst time of all processes.
Which of the following is correct?

Consider the following set of processes that need to be scheduled on a single CPU. All the times are given in milliseconds.

A scheduling algorithm assigns priority proportional to the waiting time of a process. Every process starts with priority zero (the lowest priority). The scheduler re-evaluates the process priorities every T time unit and decides the next process to schedule. Which one of the following is TRUE if the processes have no I/O operations and all arrive at time zero?