A cantilever beam of width 450 mm and effective depth 600 mm is laterally restrained at a distance L from the free end. The maximum value of 'L' to ensure proper lateral stability is ________m.

An RCC beam of width 325 mm and depth 480 mm with an effective cover of 30 mm, is subjected to a flexural moment of 175 kN-m, a shear force of 22 kN and a torsional moment of 11 kN-m. The design bending moment in kN-m will be (use shear resistance of cross section

A simply supported beam has a span of 16meter having a uniformly distributed load of 43kN/m, 6 meters long, cross the girder from left to right. Though the I.L.D ., find the maximum shear farce at z = 8m from the left end is_______ (in kN)

The maximum value of horizontal thrust in the three hinged symmetrical parabolic arch is ____ kN, due to uniform rolling load of 5 kN/m of any length (Round off to one decimal places)

If 7 kN/m is UDL per unit length span of 7 meter along circular beam. If radius of circular beam is 1 mt. then ratio of shear force to hogging moment will be 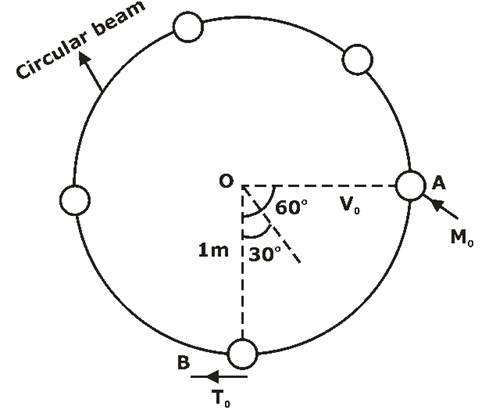 A clay layer having a coefficient of consolidation as 8 × 10-3 cm2/sec was observed to settle by 90mm in 2 years. What will be the ultimate consolidation settlement of this layer? Thickness of clay = 10m. Assume 1 way drainage

Consider a square-shaped area ABCD on the ground with its Centre at M as shown in the figure. Four concentrated vertical load of P=5000 kN are applied on this area, at each corner. 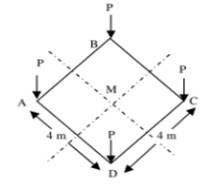 The vertical stress increment (in kPa, up to one decimal place) due to these loads according to the Boussinesq's equation, at a point 5 m right below M, is_____

The data obtained from a rectangular strain gauge rosette attached to a stressed steel member are.