Attempt now to get your rank among 111 students!

Consider the undirected graph G defined as follows. The vertices are bit string of length 5. We have an edge between vertex “a” and vertex “b” iff “a” and “b” differ only in one bit position (i.e., hamming distance1).
What is the ratio of  the chromatic number of G to the diameter of G?

Which of the following is false? 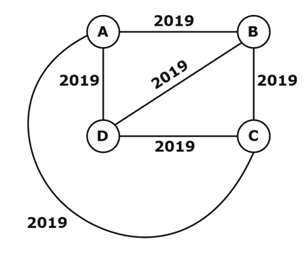 In case of primary clustering, if we have a hash table of size 15 and a run of 5 elements then the probability of filling an element at the slot just after that run of elements will be ___. (up to 2 decimal places)

Consider a system with 4 processes and 3 resources. Total resources in the system given as:

Assume the system has following information. 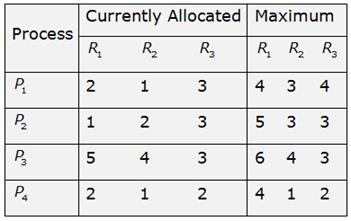 Which of the following is correct statement when above system runs the deadlock avoidance algorithm?

X = Class of all recursive languages

Which of the following relation is correct?

Suppose you want to move from 0 to 100 on the number line. In each step, you either move right by a unit distance or you take a shortcut. A shortcut is simply a pre-specified pair of integers i, j with i < j. Given a shortcut i, j if you are at position i on the number line, you may directly move to j. Suppose T(k) denotes the smallest number of steps needed to move from k to 100. Suppose further that there is at most 1 shortcut involving any number, and in particular from 9 there is a shortcut to 15. Let y and z be such that T(9) = 1 + min(T(y), T(z)). Then the value of the product yz is _____.

Consider this statement "If the bank was robbed, then I will not have any money".

Given p: "The bank was robbed" and q: "I will not have any money", which of the following are correct?

Which of the following is correct about self-relocating program?