Attempt now to get your rank among 555 students!

A large number of bullets are fired in all directions with the same speed v from ground. What is the maximum area on the ground on which these bullets will spread (height of gun from ground assume negligible)-

An aeroplane was flying horizontally with a velocity of 720 km/h at an altitude of 490 m. When it is just vertically above the target a bomb is dropped from it. How far (in m) horizontally it missed the target?

A girl sits near the edge of a rotating circular platform. If the girl moves from circumference towards the centre of the platform then the angular velocity of the platform will-

A simple structure ABCDE is supported on a hinge at A and on rollers at B while it carries a horizontal force of 1000 KN at E as shown in the figure.The magnitude of force (in KN) in member AC is _____.

A stone of mass m is projected up with a velocity u reaches a maximum height H. When it is at a height of H/4 from the ground, the ratio of Kinetic Energy K and the potential energy P at that point is: (consider P = 0 at that point of projectory)

A chain of length l is placed on a smooth spherical surface of radius r with one of its ends fixed at the top of the surface. Length of chain is assumed to be l <

. Acceleration of each element of chain when upper end is released is–

Figure shows a small wheel fixed coaxially on a bigger one of double the radius. The system rotates about the common axis. The strings supporting A and B do not slip on the wheels. If x and y be the distances travelled by A and B in the same time interval, then-

In the figure, the blocks A, B and C of mass m each have accelerations a1, a2 and a3 respectively. F1 and F2 are external forces of magnitude 2mg and mg respectively. The mass of the block on which F2 is acting is m, same as the mass of block c. 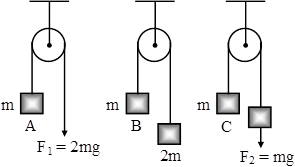 A particle is observed from two frames S1 and S2. The graph of relative velocity of S1 with respect to S2 is shown in figure. Let F1 and F2 be the pseudo forces on the particle when seen from S1 and S2 respectively. Which one of the following is not possible ?

A pendulum of mass m and length η is suspended from the ceiling of a trolley which has a constant acceleration a in the horizontal direction as shown in figure. Work done by the tension is (In the frame of trolley) –