Attempt now to get your rank among 1540 students!

The coefficient of discharge, Cd in terms of CV and Cc is given by (Notations have their usual meaning) :

An odd shaped body weighing 7.5 kg and occupying 0.01 cubic metre volume will be completely submerged in a fluid having specific gravity of _______.

The sequent depths in a hydraulic jump formed in a 4.0 m wide rectangular channel are 0.2 m and 1.0 m. The discharge in the channel (in

for a laminar boundary layer and

The outlet at the bottom of a tank is to formed that the velocity of water at point X as shown in the figure below is 2.0 times the mean velocity within the outlet pipe. The greatest length of pipe L which may be used without producing cavitation is ______m.
[Assume atmospheric pressure = 95.480 kPa (absolute) and vapour pressure = 4.0 kPa (absolute) and neglect all other losses]

A pump can deliver a discharge of 0.10

to a head of 30 m. The critical cavitation number ‘

’ for the pump is found to be 0.12. The pump is to be installed at a location where the barometric pressure is 96.0 kPa (abs) and the vapour pressure is 3.0 kPa (abs). Assuming an intake pipe friction of 0.3m. The maximum allowable elevation above the sump water surface at which the pump can be located is _______m.[Take g=9.79

The measured loss of head in a 50 mm diameter pipe conveying water at 0.6 m/s is 800 mm of water per 100 m length. The loss of head (in mm) of water per 400 m length when air flows through a 200 mm diameter pipe at the corresponding speed is
[Assume that the pipes have geometrically similar roughness and assume the densities of air and water as 1.23 and 1000 kg/m3 and the absolute viscosities of air and water are 1.8 x 10-5 and 0.12 Pa.s respectively]

A pipe of 50 mm diameter is 6 m long and the velocity of flow of water in the pipe is 2.4 m/s. What power (in W) would be saved if the central 2 m length of pipe was replaced by 75 mm diameter pipe, the change of section being sudden?
[Take f = 0.04 for the pipes of both diameter]

A velocity field is given as

Water flows through a 90 ° bend in a horizontal plane as depicted in the figure. 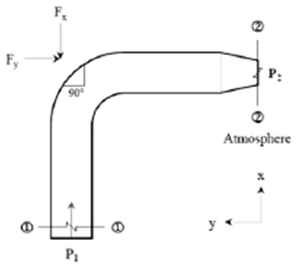 while the nozzle diameter marked at section 2-2

Assume the following:
(i) Acceleration due to gravity =

(ii) Weights of both the bent pipe segment as well as water are negligible.
(iii) Friction across the bend is negligible.
The magnitude of the force (in kN, up to two decimal places) that would be required to hold
the pipe section is______