Attempt now to get your rank among 419 students!

Cutting tool material 18-4-1 HSS has which one of the following composition. 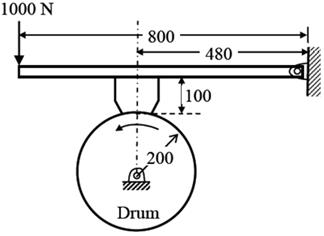 A rigid ball of weight 100 N is suspended with the help of a string. The ball is pulled by a horizontal force F such that the string makes an angle of 30 ° with the vertical. The magnitude of force F (in N) is __________

The friction force is generally due to

2) Charcoal has less energy density as compare to Bioethanol.

3) Charcoal is used in the production of high-quality steel.

from the left support. The bending moment at the point of application of the load is given by

The device which permits the connection and disconnection of shaft is:

A three rotor system has following number of natural frequencies __________.