Attempt now to get your rank among 24 students!

Which one of the following drugs is obtained from the capsule of Papaver somniferum?

Which one of the following statements regarding restriction/modifying enzymes used in recombinant DNA technology is correct?

The table given below shows the characters shared between two taxa based on the presence (+) and absence (-) of data. 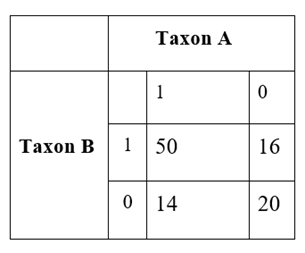 Which of the following pairs represent the Jaccard’s coefficient and simple matching coefficient respectively?

Which of the following statement is true for Fasciola hepatica (liver fluke)?

The λ cohesive ends are called the cos sites and they play distinct roles during the λ infection cycle.
A) They allow the linear DNA molecule that is injected into the cell to be circularized, which is a necessary prerequisite for insertion into the bacterial genome
B) The role of the cos sites is to act as recognition sequences for an endonuclease that cleaves the catenane at the cos sites, producing individual lambda genomes. This endonuclease, which is the product of gene A on the lambda DNA molecule, creates the single stranded sticky ends, and acts in conjunction with other proteins to package each λ genome into a phage head structure.
C) Cos site have origin of replication and promoters for early genes essential for regulation of lytic-lysogenic decision

Which of the following statement is true for λ phage cos sites?

Which of the following agents can inhibits eukaryotic protein synthesis?

Phenology is periodic events of plant life cycle over the course of a year and how these events are influence by seasonal and inter-annual climatic variations. Following are some statements about the science of phenology:

A) Developmental phases of plants are indicators of climatic conditions.

B) Phenological parameters include temperature and precipitation records of a particular geographical zone.

C) Phenological maps are made by data recording of plant phenophase along with their geographical coordinates.

D) Phenological vegetation period can be considered as time span of phenophases of indigenous plants.

E) Phenological calendar comprises of seasonal changes from spring to summer and summer to fall.

Which of the above statement(s) is INCORRECT?

Two strains of corn averaging 48 and 72 inches in height, respectively, are crossed. The FI progeny are quite uniform averaging 60 inches in height. Of 500 F2 plants, two are as short as 48 inches, and two are as tall as 72 inches. What is the probable number of polygenes involved in this trait?