Attempt now to get your rank among 2083 students!

Two circles with centres at Q and P having radii 8 cm and 4 cm respectively touch each other externally. Find the length of their direct common tangent.

ABC is an isosceles triangle where AB = AC, which is circumscribed about a circle. If P is the point where the circle touches the side BC, then which of following is true.

The diagram below represent three circular garbage cans, each of diameter 2m. The three cans are touching as shown. Find (in meter) the perimeter of the rope encompassing the three cans. 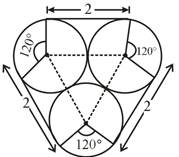 If PA and PB are two tangents to a circle with centre O, such that ∠AOB = 110°, then find ∠APB.

AB is diameter of a circle with centre O. CD is a chord which is equal to the radius in length. AC and BD are produced to meet at P. Then ∠APB will be:

Two equal circles of radius 4 cm intersect each other such that each passes through the centre of the other. The length of the common chord is :

PA and PB are the tangents of a circle, CD is an another tangent, C is a point on PA and D is a point on PB. If length of PA = 10 cm. Find perimeter of ΔPCD.

Two circles touches each other externally at point A and PQ is a direct common tangent which touches the circles at P and Q respectively. Find ∠PAQ.

Two circles of radius 4 cm and 9 cm touch externally at a point and a common tangent touches them at point P and Q respectively. Then what will be the area of square with side PQ.